Many thanks to Dave for permission to use this photo of his cab.

I’ve seen a newspaper advert for a slightly different version of this cab and so I think that this one which appeared on Ebay is very rare – maybe because WEM cabs from the 1980s didn’t catch on very well and didn’t sell very well.

As well as the newspaper advert, there is also an entry in the 1979/1980 version of the Bell Musical Instruments catalogue, a scan of which is included below. 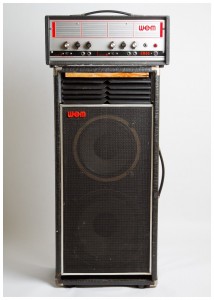 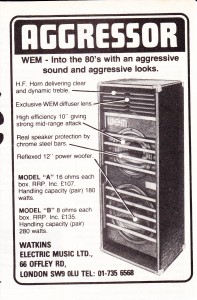 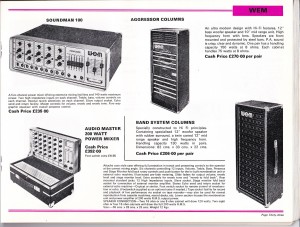 I purchased the following cabs in March 2019 as I was under the misapprehension that they were 1×12 versions of the Aggressor cab.

Sadly, it turned out that they were originally Aggressor cabs but a previous owner had butchered (I can’t think of a better word) them and had sawn off the bottom of each cab, thus turning them into 1×12 cabs. To make things worse, they hadn’t done a very good job. The bottom panels were tacked into place and it left a very rough and unsightly join on the bottom of each cab. I cleaned up and strengthened the joins and patched the tolex so they do now look better and are usable cabs but it doesn’t change the fact that they are heavily modified which makes them virtually worthless. It’s such a shame what people will do with decent cabs. 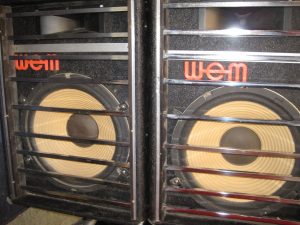