WEM made a series of wedge monitors as part of the Songbird range.

There was a powered version which can be seen here :- Powered Version

and there were two variations of the passive / non-powered version. All three wedge monitors used the same wedge style cab containing a single 10″ driver and a single horn. The 10″ driver was made specifically for WEM, although not sure who by. Unfortunately, the drivers used on Songbird cabs had a significant design fault in that they had a ring made of foam-like material which attached the main cone to the metal chassis. This foam-like material started to disintegrate after a few years. The two passive cabs shown in the pictures below are the only two cabs that I’ve seen from the Songbird range which haven’t needed to have the driver replaced, so the cans shown here still have their original drivers.

As can be seen from the pics, there are two variations of the passive cabs. Both had twin jack sockets housed in plastic cup-type holders on the underside of the cabs but only one of the cabs has a built-in volume control and additional runner feet on the end to protect the volume control and to also enable the cab to be stood on its end.

The Songbird cabs didn’t really catch on – except perhaps with accordion players, and, being made of chipboard, they weren’t as robust as earlier cabs. As a result, not so many were made and even fewer lasted for any length of time. 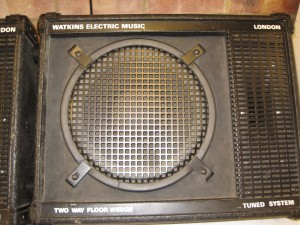 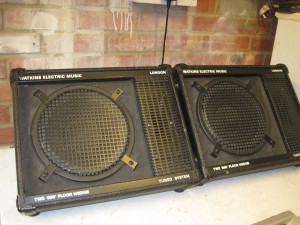 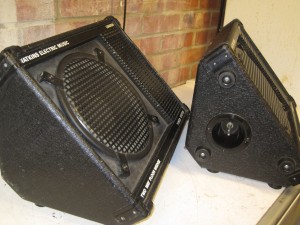 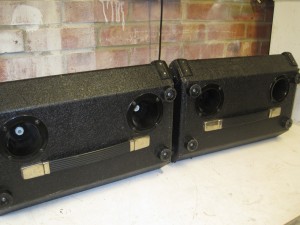