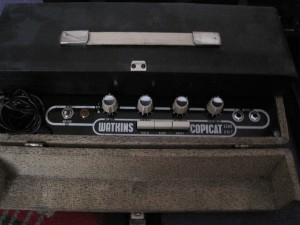 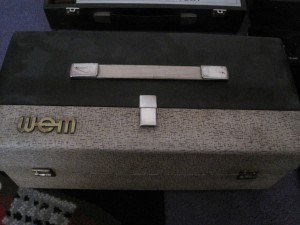 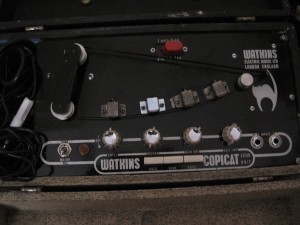 The Mk II valve Copicat is probably the one that put Copicats on the map worldwide. All budding guitarists back in the late 1960s had to have one and that included yours truly. However, I believe, although not 100% sure, that, contrary to what many people think, The Shadows never actually used Copicats. The Mk II put the Copicat into the affordable range for a lot of guitarists. I currently have one which is labelled with a WEM logo but there were others made that had a Watkins logo although they are identical in all other respects as far as I know.

There were different colour schemes. Black/Cream (like mine) and Blue/Cream were probably the most common although I believe they were otherwise the same.

Their use of a pair of ECC83 valves along with a single 6BR8 valve gave them a very warm mellow sound (imo) and it’s one of the reasons why they sell for significant amounts of money these days as guitarists like to use them to get a “valve sound” front-end as well as for their echo capability.

The following pic shows an early Copicat Mk II made around 1962.  The main difference to the later Mk IIs is the blue fascia. Thanks to the owner, Brian, for permission to use this pic.